The Ultimate Guide to Living in Edmonds, WA

Edmonds is a prosperous city in the southeast corner of Snohomish County, Washington. It’s a suburb of Seattle, located within 20 miles north of the big city, and neighbor of Washington’s beautiful Puget Sound. As a resident here, you’ll be surrounded by incredible views from every direction - with the Olympic and Cascade mountains on one side and Puget Sound on the other. Locals enjoy easy access to the beach, mountains, and numerous recreational activities that come with them. Edmonds also serves as a gateway to the greater Olympic peninsula via ferry from one of its established marinas. 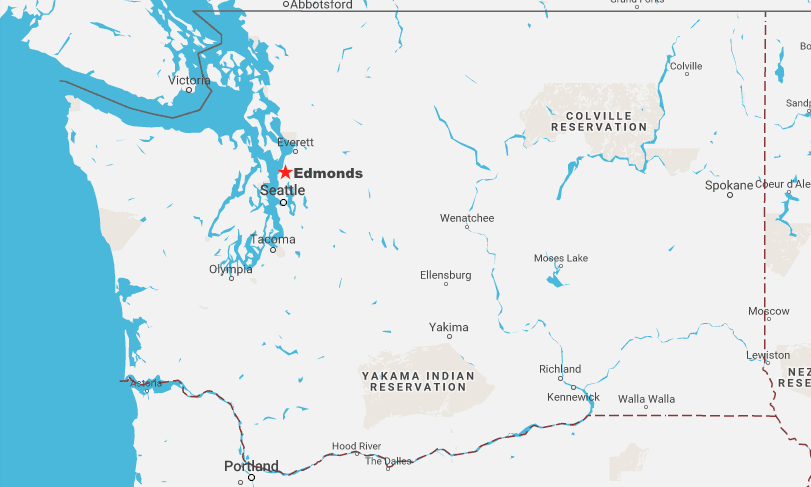 Community is a huge factor when decided where to live. Let’s take a look at the government and schools in Edmonds, WA, as well as the general demographics/economy of the city.

Edmonds operates a mayor-council form of government. This means there's a mayor, who acts as the main political leader, and seven policy makers (from the council) who help guide his decisions and maintain checks and balances.

They are responsible for maintaining prime economic conditions, a strong community, commodities such as transportation, and more to make Edmonds a great place to live.

You can visit the Edmonds City website here for more information on city projects, events, announcements and information in general.

The majority of students in Edmonds city will pertain to the Edmonds School District. A couple cool facts about the district: they have two new schools slated to open in late 2018 and all the schools in Edmonds put an emphasis on technology with a 1:1 chromebook supply for every student from 1st to 12th grade. You can take a look at our Snohomish County home listings below to find out exactly which boundaries any specific home would fall into.

Edmonds is one of the larger cities in Snohomish county, with an estimated 2015 population of 40,000. It’s excellent waterfront location made it an attractive destination for early settlers, and access to multiple industries quickly made the city very prosperous.

The city continues to enjoy above average economic conditions - It's unemployment rate is well below the national average while it enjoys above average recent/future job growth. Living in Edmonds, WA opens the doors to many opportunities that aren’t enjoyed by the larger portion of the population.

Historically, the main industries have been timber and agriculture, but locals now participate in more of a service type economy, meaning more industrial/corporate jobs that are created as a result of its urban location close to Seattle. A strong transportation network is a great asset for those living in Edmonds - you’ll be able to pick from biking, walking, kayaking, ferry, bus, and Amtrak (train). Here’s a complete list of transportation in Edmonds.

Things to Do in Edmonds, WA

With such prime location, it’s not surprising that there’s a great mix of entertainment and attractions for those living in Edmonds. The city is centrally located amongst some very beautiful parts of the world that the Northwest is famous for. There's plenty of adventuring to do in the pines and mountains of the cascades to the north, and the energetic nightlife of Seattle to the south. You won't be bored, that's for sure.

Here’s a lits of things to do in Edmonds:

Here are the top 5 restaurants in Edmonds, according to The Culture Trip:

And here are few of the best bars, too (according to Yelp reviews)

Cost of Living in Edmonds

Of course, this is one of the main things you'll want to look at when moving to a new area. Research group bestplaces.net has a great database of living costs throughout the United States, so we've used quite a bit of their research in our analysis to compare Edmonds to the rest of Washington state.

100 is the average cost of living in the US, according to their scale, and Washington scores a 120.5. Edmonds, being a very desirable place to live, scored a 152.9

Let’s break down that cost of living in Edmonds. There are 5 factors, also rated on a scale of 100:

As you can see, most of the cost of living indexes are pretty normal - except for housing. This is definitely an area that you won’t want to rent in, but, on the flipside, it’s a great area to own a house. You’ll pay more up front, but the rapidly growing population and demand of living in Edmonds will offer you a nice return on investment. Especially if you can get a good deal on Edmonds real estate!

You won't find bigger fans than us of Snohomish county. We absolutely love the area, and Edmonds would be a beautiful living destination for you and your family, or a perfect launch pad for your career with the area’s booming economy.

If you would like more information on any of these Edmonds homes for sale, just click the "Request More Information" button when viewing the details of that property. We can provide you with disclosures, past sales history, dates and prices of homes recently sold nearby, and more.

And, if you haven't already, be sure to register for a free account so that you can receive email alerts whenever new Edmonds homes go up for sale on the market.

Feel free to reach out with any questions about living in Edmonds, WA - we’d love to help!

View All Blog Posts
All listings featuring the icon

are provided courtesy of the Northwest Multiple Listing Service (NWMLS), Copyright 2023. All rights reserved. The database information herein is provided from and copyrighted by the Northwest Multiple Listing Service (NWMLS). NWMLS data may not be reproduced or redistributed and is only for people viewing this site. All information provided is deemed reliable but is not guaranteed and should be independently verified. The information contained in these listings has not been verified by The Novak Team and should be verified by the buyer. All properties are subject to prior sale or withdrawal. All rights are reserved by copyright. Property locations as displayed on any map are best approximations only and exact locations should be independently verified.